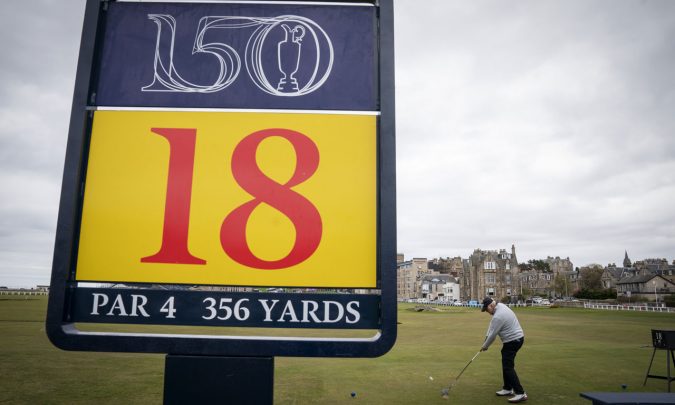 St Andrews is the most-used venue for the game’s oldest major championship and plays host once more for the 150th Open Championship.

This will be the 30th time the Old Course has been used for The Open and here we take a look at all 18 holes in our St Andrews course guide.

1st (Burn), 375 yards, par 4: The widest fairway in golf, though not wide enough to stop Ian Baker-Finch and others going out of bounds. The Swilcan Burn snakes its way across in front of the green and when the flag is at the front expect to see balls spinning back in. 2nd (Dyke), 452 yards, par 4: With gorse down the right there is a temptation to aim way left over towards the Old Course Hotel, but Cheape’s bunker lies in wait. Two bunkers have been moved closer to the right-hand side of the green, which has a pronounced diagonal ridge.

3rd (Cartgate Out), 398 yards, par 4: Gorse in front of the tee hides much of the fairway and some tiny pot bunkers on the right are definitely to be avoided. Depending where the pin is, the banana-shaped Cartgate bunker can be a big danger.

4th (Ginger Beer), 480 yards, par 4: So named because it was among the items a 19th-century trader called Old Daw Anderson sold from a mobile refreshment hut. A plateau to the left gives a better sight of the green, but that brings more bunkers into play.

5th (Hole O’Cross Out), 570 yards, par 5: Pot bunkers down the right get everyone’s attention here, but providing it is not into the wind, the 85-yard long green can be reached in two over the Spectacles bunkers and a gully.

6th (Heathery Out), 414 yards, par 4: A marker post helps indicate the line between the Coffins bunker on the left and the scattered bunkers down the right. Another gully just short of the green adds to the importance of distance control.

7th (High Out), 371 yards, par 4: The approach is played across the line of the short 11th and involves a carry over the huge Shell bunker, with the Eden Estuary behind. The area to the right of the green has been remodelled to create more undulations.

8th (Short), 187 yards, par 3: The first of only two par threes, lengthened by 13 yards since 2015. Two bunkers short should not come into play much, but the green tilts slightly towards the back and a crosswind can cause real trouble.

9th (End), 352 yards, par 4: Driveable in favourable conditions, but Boase’s and End Hole bunkers narrow the landing area and another has been added short and left of the green, which is not shared with another hole.

10th (Bobby Jones), 386 yards, par 4: Named by the Town Council in 1972, the year after the great American amateur died. Runs in opposite direction to the ninth and shares the same fairway.

11th (High In), 174 yards, par 3: Strath bunker that eats into the front and Hill on the left are both treacherous, while the back-left portion of the green has been lowered to create more pin position options. 12th (Heathery In), 351 yards, par 4: Stroke bunker sits in the middle of the fairway, but the two slightly further on are more of a hazard. Going left or trying to carry them brings gorse into play, while the shallow two-tier green is one of the trickiest.

13th (Hole O’Cross In), 465 yards, par 4: Avoid the Coffins bunkers and come up short of the Cat’s Trap at the end of the fairway to set up an approach over the Lion’s Mouth to the largest putting surface on the course, shared with the fifth.

14th (Long), 614 yards, par 5: Drives played right of The Beardies will enter the wide expanse known as the Elysian Fields, but there is out of bounds over the wall down the right and 110 yards short of the green lies the cavernous Hell bunker.

15th (Cartgate In), 455 yards, par 4: The distant church steeple provides a pointer for the line to take between two humps known as Miss Grainger’s bosoms. Three pot bunkers called Rob’s have to be taken into consideration, while there is gorse on the right.

16th (Corner of the Dyke), 418 yards, par 4: Out of bounds lurks down the entire right of a fairway which contains the Principal’s Nose pot bunkers and, just beyond, the equally nasty Deacon’s Syme. Going left is safe, but two more bunkers then have to be negotiated.

17th (Road), 495 yards, par 4: One of the most demanding holes in golf. The Old Course Hotel stands inside the corner of the dogleg, while the slender, angled green is protected at the front by Road bunker – which has been widened by half a metre on the right-hand side – and the wall beyond.

18th (Tom Morris), 356 yards, par 4: Shots have to be played off the road – Granny Clark’s Wynd – if the ball comes to rest on it. The Valley of Sin is front left of a green which will be reachable for some, but care needs to be taken with out of bounds all around.