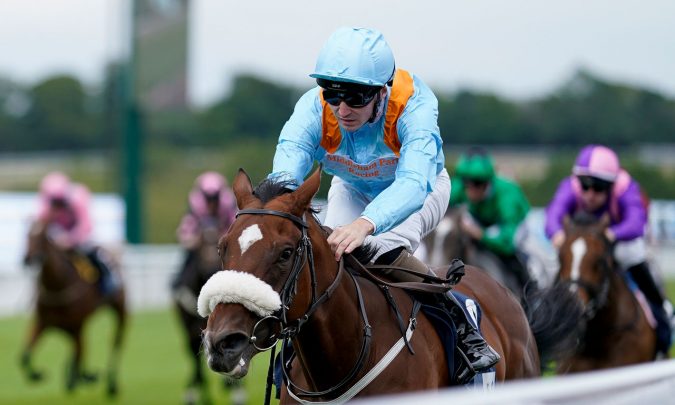 Coral has installed The Platinum Queen into their Coolmore Nunthorpe Stakes betting as 7/1 fourth favourite after connections confirmed they were considering supplementing the filly for the York Group One.

The Richard Fahey-trained filly was an impressive winner of the Alice Keppel Fillies’ Conditions Stakes at Goodwood last week, defeating a field of 10 by four lengths as the 5/6 favourite.

The race was one of two under consideration for the meeting, with owners Middleham Park Racing also mulling over a tilt at the Group Three Molecomb Stakes over the same five-furlong trip.

Richard Hannon’s Trillium won the latter race and The Platinum Queen ultimately lined up for the Alice Keppel later on the same card, duly winning and posting the quicker time as she stopped the clock at 56.5 seconds.

Coral’s David Stevens said: “While it will cost them £40,000 to add The Platinum Queen to the Coolmore Nunthorpe, their connections can take some confidence from the fact that we would consider her to have a leading chance should she line up at York later this month.”

The Goodwood figures have left connections wondering if they ought to have gone for the Molecomb after all, with their filly’s winning time a new track record for two-year-olds.

“We were quite impressed with how Trillium went about her business in the Molecomb, the jury was out on whether we should or we shouldn’t have run in that race after that,” said Middleham Park’s Tom Palin.

“Then we go and do what we’ve done and lowered her colours and broken the track record.

“There were a few people thinking we’d done the wrong thing but she’s quite a forward-going filly. She’s not buzzy, she doesn’t sweat or anything like that, but for her development we felt it was best to give her a slightly quieter day in slightly calmer waters to get another win under her belt.

“We’ve kind of had our cake and eaten it. We had that quieter race and in the same breath, she’s shown just what she’s capable of by setting a new track record down there.”

The Middleham Park team are now faced with another choice ahead of York’s Ebor meeting, with the Listed Roses Stakes a possibility alongside a supplementary entry for the Group One Nunthorpe Stakes.

Both races are run over five furlongs but the latter would be a significant step up in calibre, though Palin is encouraged by the sectional data and even has a Group One-winning rider lined up should they opt for the Nunthorpe Stakes.

He said: “She will definitely go to York, the Roses is on the Saturday, the Listed five-furlong race. I imagine she’d be even-money or maybe a bit shorter than that if she went there. It is still a definite option but over the weekend there has been a fair bit of action in the press with people doing the sectionals and weighing up the sprint division.

THE PLATINUM QUEEN is a rocket! 🚀👑pic.twitter.com/6fcI6F2N03

“There’s a possibility of us taking our chance, we’ve had a little look into the numbers and it isn’t the stupidest idea in the world.

“It doesn’t look like there’s a Battaash out there at the moment, somebody that is just staking their claim on the division. I think it looks quite an open division and the King George at Goodwood kind of confirmed that.

“There were six horses finishing within two lengths, including our own Clarendon House, who is a 105 horse and would have to give our filly quite a lot of weight in the race. It’s a very, very strong possibility that we will look at taking on the Nunthorpe.

“We will probably leave it as late as we dare, just so we know how the filly is. We’ll make the decision and speak to the syndicate when we’ve got all the information at our disposal and we feel it’s something we want to take a chance on.

“It could be quite sporting to roll the dice and give it a go. She has speed but it’s not just speed, she’s classy as well.

“The trainer is in favour and we have provisionally pencilled in a jockey as we’ve spoken to Hollie Doyle and it looks as though she’d be happy to ride.”