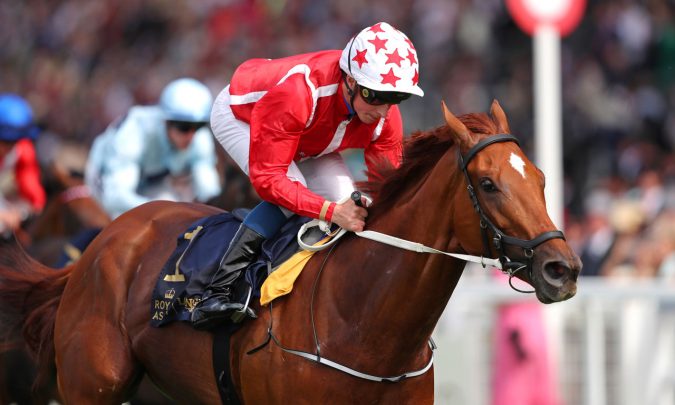 Coral have cut Saffron Beach to 8/1 for the Breeders’ Cup Filly & Mare Turf after the filly struck Group One gold for the second time with an impressive display in the Prix Rothschild at Deauville.

Having kicked off her four-year-old campaign by finishing fourth in Dubai, Saffron Beach claimed Royal Ascot glory in the Duke of Cambridge Stakes in June and was the 8/11 favourite for her French debut.

Just as she did at the Royal meeting, Saffron Beach forced the pace from the off under William Buick, with Aidan O’Brien’s Tenebrism positioned in her slipstream and the Paddy Twomey-trained Pearls Galore leading a three-horse group that raced closer to the stands rail.

With Pearls Galore weakening out of contention, it turned into a three-way fight between Saffron Beach, Tenebrism and the Francis-Henri Graffard-trained Malavath racing inside the final furlong.

Tenebrism, bidding to supplement her Group One victory in the Prix Jean Prat three weeks ago and in receipt of 7lb from Saffron Beach, did her best to make a race of it, but Chapple-Hyam’s charge found more once challenged and won going away at the finish.

What a filly! Saffron Beach pulls clear of Tenebrism in the Group 1 Prix Rothschild at @fgdeauville for William Buick and @JaneChappleHyam ⭐️ pic.twitter.com/idl1auiKZw

“She’s very brave, very tenacious and is probably better here than she was at Royal Ascot. They came to challenge her and she found another gear, which was nice to see,” Chapple-Hyam told Sky Sports Racing.

“We’re very pleased because we were giving the three-year-olds 7lb, they came to challenge and she went on with it, so it’s good.”

Chapple-Hyam confirmed a trip to Keeneland was on the agenda, with the Newmarket handler adding: “She’s in the Matron at Leopardstown and the Sun Chariot at Newmarket and then, hopefully, if that all goes well, the Breeders’ Cup.

“I’m very grateful to the owners for allowing me to train her. It’s a good team effort from everyone back at Abingdon Place.”