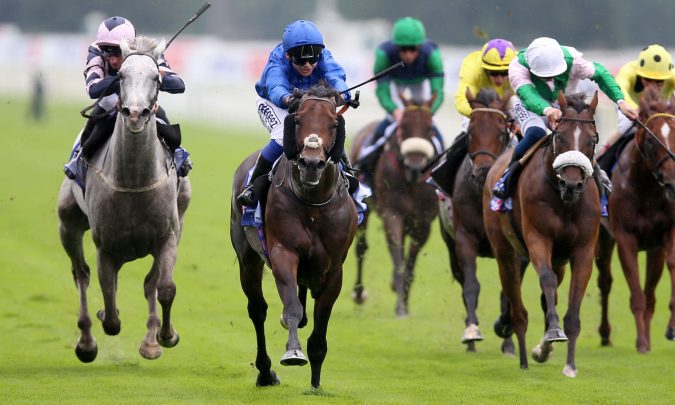 Real World is still in the mix for the Coral-Eclipse Stakes at Sandown, having chased home Baaeed on his last two outings.

Saeed bin Suroor’s five-year-old got closer to William Haggas’ unbeaten star at Royal Ascot than he did in the Lockinge, although he was still beaten by a length and three-quarters.

A step up to 10 furlongs – a distance at which he has won before – is now under consideration, and it would also mean a Baaeed-free race.

“He’s in the race and we just need to see how he comes out of Ascot,” said Bin Suroor.

“I want to see how he is next week but it’s so far so good, he looks happy and fresh but we need to see closer to the race.

“We will go back up to a mile and a quarter with him, he’s won over it before in a Listed race at Newbury last year so it is definitely something to look at.

As @JimCrowley1978 said himself “It doesn’t get easier than that!” pic.twitter.com/isb3KFY8lf

“He got closer to Baaeed. He was coming back at him, I think there could be more to come from him at 10 furlongs.

“If you look at his pedigree you might not think he’d stay, but we’ve seen him get it before. He’s a class horse. The Juddmonte International is another race we could look at.”

In seven starts on turf, Baaeed is the only horse to beat Real World, who again tried dirt earlier in the year in the Saudi Cup and Dubai World Cup.

Vadeni set to be supplemented

Another runner in the Coral-Eclipse Stakes is likely to be Vadeni, who looks set to be supplemented after victory in the Qatar Prix du Jockey Club earlier this month.

Vadeni produced a dominant display to provide trainer Jean-Claude Rouget with a fifth victory in the French Derby at Chantilly.

Georges Rimaud, the Aga Khan’s stud and racing manager in France, told the Racing Post on Sunday: “It’s more than a thought at this stage. It is very likely he will be supplemented for the Eclipse Stakes.

“He may have a little breeze according to what Jean-Claude [Rouget] feels but he is ready and in good form, having taken his run in the Jockey Club very well. Speaking today, it’s all systems go.”

Looking at the Coral-Eclipse odds, Vadeni has been installed as the 15/8 favourite while Real World is available at 6/1.

Coral’s David Stevens said: “St Mark’s Basilica followed up his Prix du Jockey Club victory with success in the Coral-Eclipse last year, and we make Vadeni favourite to complete the same double following the news that the Aga Khan’s colt could be added to the Sandown showpiece.”

All you need to know about the Coral-Eclipse Stakes