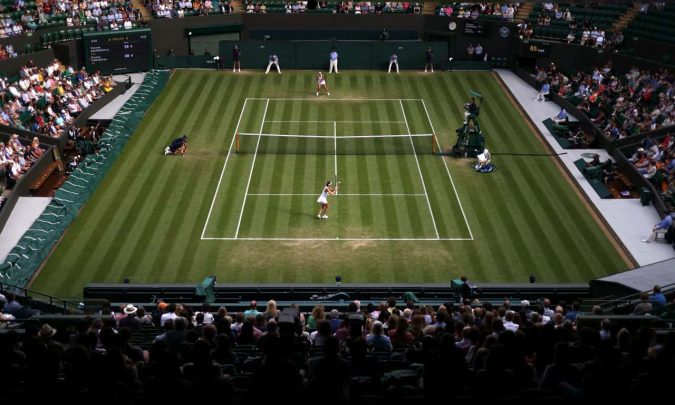 Analysis of grass-court form ahead of Wimbledon 2o22

Wimbledon – the UK’s biggest tennis event of the year – gets under way at the end of June.

While the build-up to Wimbledon 2022 has been overshadowed by the decision to ban Russian and Belarusian players, and the subsequent removal of ATP and WTA ranking points, the tennis itself should provide plenty of intrigue.

Can Novak Djokovic defend his crown and join his idol Pete Sampras as a seven-time winner? Who will succeed the retired Ashleigh Barty as women’s champion?

Using data from the past 10 grass-court seasons, we have assessed the likely challengers for the men’s and women’s singles titles at Wimbledon 2022, as well as who is best equipped to make a surprise run at the tournament.

Who has performed best at Wimbledon?

The last 10 Wimbledons have been shared among three players on the men’s side: Serbia’s Djokovic has six, while Britain’s Andy Murray and the Swiss Roger Federer have two apiece.

Djokovic, Murray and Federer are also the only players to win at least 80% of their matches at SW19 since 2011.

Among active female players, only Serena Williams has a win rate above 80% over the same period. Titles have been shared more equally, with Williams winning three, Petra Kvitová two, and five players taking one each.

Who are the grass-court specialists?

Big servers who like to keep points short have traditionally performed better at Wimbledon than at other Grand Slams. The grass surface is thought to help their shots skid through the court, making it more difficult for the returner than on a clay court, for example, where the ball checks and sits up a lot more.

Although grass courts have become slower over the years, these sorts of players still appear to fare better at the All England Club than elsewhere.

Players such as Jiří Veselý, Sam Querrey, Nick Kyrgios and Matteo Berrettini – all tall men with fast serves and heavy groundstrokes – have a far superior record at Wimbledon than at the other three majors.

Veselý, for example, has a career-high ranking of number 35 and yet he has won nearly two-thirds (65%) of his matches at SW19 since 2011, compared with just 29% at the other Grand Slams.

When looking at women’s singles matches, several players with an aggressive, powerful game have outperformed at Wimbledon.

Americans Alison Riske and CoCo Vandeweghe, Belgium’s Kirsten Flipkens, and Italy’s Camila Giorgi could all be considered in that category, with winning records at SW19 compared with losing ones at the other Grand Slams.

However, the grass has also rewarded players renowned for their defensive skills. Angelique Kerber, known for her speed on the baseline, has a Wimbledon title to her name and an impressive 79% win rate.

Who struggles on the grass?

Just as some players thrive on the grass courts at Wimbledon, others find it very hard to adapt, including several of the best players in the world.

Spaniard Pablo Carreño Busta is perhaps the clearest example of this. Carreño Busta has failed to win a single match in six attempts at the All England Club. In the corresponding years, he won 36 of 58 matches (62%) at the Australian, French and US Opens.

Even the great Rafael Nadal, twice a Wimbledon champion, has struggled to translate his success on other surfaces to the grass. He has a 75% win rate since 2011, compared with 90% elsewhere.

There are some big names on the women’s list of Wimbledon underperformers. The talented Canadian Bianca Andreescu has lost both her matches at SW19 despite some impressive performances elsewhere, including a US Open title in 2019.

Former world number one and four-time Grand Slam champion Naomi Osaka has won just four of seven matches at the All England Club ahead of Wimbledon 2022. The Japanese superstar has a win rate of 78% at the other three majors in corresponding years.

Is it worth paying attention to grass-court warm-up events?

The grass-court season is very short, with just three weeks separating the end of the French Open and the start of Wimbledon. With grass and clay being wildly different surfaces, some players choose to play at least one warm-up event to give themselves the best chance of success at SW19.

History shows us that success at warm-up events doesn’t always lead to a deep run at the All England Club. While five of the last 10 men’s champions reached a final in a warm-up tournament, only one did so on the women’s side.

Both of Murray’s Wimbledon triumphs were built on the back of titles at the Queen’s Club, while Federer’s SW19 wins in 2012 and 2017 followed a runner-up and title-winning performance at Halle. Djokovic also played a warm-up event before his victory in 2018, reaching the final at Queen’s.

Kvitová is the only woman to do something similar in the last 10 seasons. Her 2011 title came on the heels of a runner-up performance at Eastbourne.

Reaching the final in a warm-up tournament has been a curse as well as a blessing. Around half of finalists at pre-Wimbledon events have failed to pass the second round at SW19.