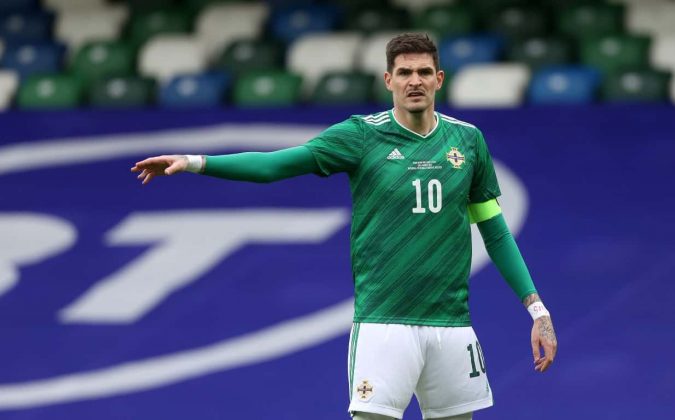 The Nations League has thrown up more than a few interesting fixtures over the next couple of weeks and we have picked out some Northern Ireland v Greece betting tips.

The hosts were celebrating the last time they welcomed Greece to Windsor Park but that was back in 2015 and the road has been a bit rocky at times since.

The pair go head to head again on Thursday June 2 and the action will be shown live on Premier Sports, with the game kicking off at 7.45pm.

Testing times for the small nations

Northern Ireland boss Ian Baraclough will be spending most of this international break with his fingers crossed after voicing his concerns about the demands the hectic schedule is putting on his players.

They face four games in 10 days, kicking off their latest Nations League campaign against Greece before taking on Cyprus (twice) and Kosovo.

Baraclough certainly has a point but he should be just as worried about his side’s home form heading into this one.

One win from their last 12 on their own patch is a dismal return and they have failed to score in seven of those games while managing just one goal in each of the other five. The one win in that run came against Lithuania but it is worth noting Italy and Switzerland, the two teams who finished well clear in qualifying for this year’s World Cup, were held to goalless draws at Windsor Park, just like Holland were in the qualifying section for last year’s delayed Euro 2020.

Baraclough’s men also just missed out on that tournament with a home play-off defeat at the hands of Slovakia after extra-time.

Greece, who are managed by former Tottenham and Chelsea favourite Gus Poyet, are hardly hot-shots themselves and managed just eight goals in as many games on their way to third place behind Spain and Sweden in the race to Qatar 2022.

A familiar face back in the fold

Baraclough has turned to Kyle Lafferty to solve his problems up front.

The former Rangers striker has just helped Kilmarnock back to the Scottish top flight and has returned to the international fold with a chance to add to his 20 goals for his country.

Baraclough said: “I suppose it was big news when Kyle was left out of the squad previously but the door was never closed on him.

“He’s applied himself very well at Kilmarnock, scored goals to get them back in the Scottish Premiership, and he deserves his recall. Hopefully he can bring that form into the Northern Ireland squad.

“We scored three goals against Luxembourg (in March) and we could have scored more.

“But it (scoring) has been an age-old question for Northern Ireland and Northern Irish strikers, whether we can hit the target enough.” And their opponents on the night they booked their spot in France? That’s right, Greece.

They did the double over the shock Euro 2004 winners during that campaign and topped their section with six wins, three draws and a defeat.

The Greeks propped up the table with just one win and six losses but the two teams seem much closer these days and the FIFA rankings back that up with Northern Ireland in 54th spot and Greece just one below them.

There are four new recruits in the squad with Conor McMenamin, Shea Charles, Brodie Spencer and Charlie McCann joining up.

There are 13 players in the pool with five caps or fewer and a third of Baraclough’s squad are still eligible for the Under-21s.