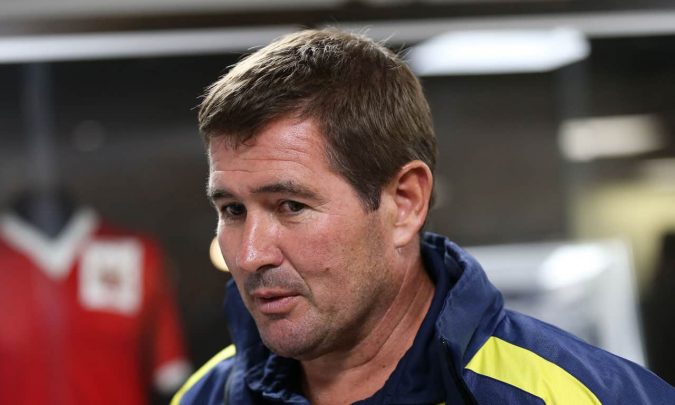 It is a big weekend for Nottinghamshire clubs at Wembley and we have picked out some Mansfield v Port Vale betting tips for the League Two play-off final.

Nigel Clough will be hoping to lead the Stags to promotion on Saturday before his former club Nottingham Forest face Huddersfield in the Championship promotion decider on Sunday.

The League Two final kicks off at 4pm on Saturday and is live on Sky Sports.

Mansfield went into the final day of the regular season with a shot at automatic promotion but ultimately fell just short.

If there was any disappointment at having to go into the play-offs then they did not show it as they won both legs of their semi-final against Northampton to complete a 3-1 aggregate victory and book a first trip to Wembley since 2011.

“That could well be Mansfield Town’s ticket to Wembley!” 🎫

Stephen McLaughlin with a MASSIVE goal in this second leg! ⚽ pic.twitter.com/y9tR7ioywM

Their form in the second half of the season has been in contrast to a slow start which saw them win their first two games but then embark on a 14-match winless run in all competitions which dropped them into the relegation zone.

The club kept faith in Clough at a time when making a managerial change might have been the easy option and were rewarded as a run of 17 wins and three draws from 22 games put them in the promotion mix and also took them to the third round of the FA Cup.

Vale underdogs – but only just

Vale finished one point and two places above Mansfield in the table and the League Two play-off final odds suggest there is little to choose between the two teams.

The Valiants are 10/11 to go up and 7/4 for victory in normal time but their recent form is not as impressive as Mansfield’s.

Automatic promotion looked on the cards when a 1-0 win at Hartlepool in April extended their winning run to five matches and put them five points clear of fourth-placed Northampton.

Two wins from their last four games would have been enough to secure a top-three finish but Vale’s form deserted them at the worst possible time.

Three straight defeats against Bristol Rovers, Walsall and Newport dropped them out of the automatic promotion places and a 1-0 win at Exeter on the final day was not enough.

Vale’s promotion dream faded even further when they went 2-0 down at Swindon in the play-off semi-final but a late goal by James Wilson gave them renewed hope.

HUGE goal as Port Vale pull one back late on!! ⚡⚡

James Wilson dips in at the back post and this tie suddenly looks VERY different… 😳 pic.twitter.com/eneT2VKqbm

Wilson struck again early in the second leg and Vale then held their nerve to win a tense penalty shoot-out 6-5.

Another win on penalties can be added to Mansfield v Port Vale betting tips at 10/1 while the final is 21/10 to go to extra time.

Mansfield will be hoping it is third time lucky after failing to beat Vale during the two previous meetings this season.

Town came from a goal down to draw 1-1 at Field Mill in October but were beaten 3-1 at Vale Park despite scoring first, with two goals in the last 15 minutes from on-loan Huddersfield striker Kian Harratt securing the three points for Vale.

Both teams to score again looks a decent option for Mansfield v Port Vale betting tips at 10/11 while either team can be backed to win from behind at 16/1.

A goal in both halves and a draw, as in the Field Mill clash, could be the way to go at 5/1.

Much of Mansfield’s best play comes down the left and Irish duo Stephen McLaughlin and Stephen Quinn will be pivotal to their chances of dominating at Wembley.

The versatile McLaughlin has been a regular at left-back this season and has been instrumental in Mansfield’s improvement, scoring eight goals since the start of December including the all-important goal at Northampton.

His link-up play with former Republic of Ireland international Quinn has been a big part of his improvement and McLaughlin, voted player of the year by his team-mates recently, is 12/1 to score first or 17/2 to be on target in a Mansfield win.

Vale could have three former Mansfield players in their starting line-up with Mal Benning, Aidan Stone and Harry Charsley expected to start while boss Darrell Clarke is a former Stags midfielder.

Stone was eventually the hero in the shoot-out against Swindon while Wilson is no stranger to the big occasions from his time at Manchester United and is the joint-favourite at 5/1 to score first along with team-mate Jamie Proctor.