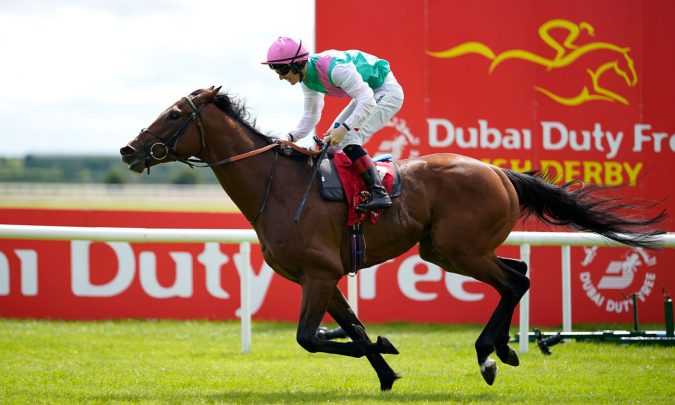 A luckless third in the Derby at Epsom, Ralph Beckett’s star colt gained compensation when routing his rivals in the Irish Derby at the Curragh earlier this month.

A rematch with his Epsom conqueror Desert Crown looked to be on the cards in this weekend’s midsummer showpiece, but as expected the latter has been taken out following a well-publicised setback.

In his absence, Westover is the 11/8 favourite to add the King George to his big-race CV in the hands of Irish champion jockey Colin Keane.

John and Thady Gosden have confirmed both Emily Upjohn and last year’s runner-up Mishriff (pictured below) and they are 5/2 and 7/2 respectively. Emily Upjohn has been rerouted after missing Saturday’s Irish Oaks due to travel complications, while connections of Mishriff will be hopeful he can go one better than when chasing home Adayar 12 months ago after finishing a close second to French raider Vadeni in the Eclipse.

Last season’s shock Arc winner Torquator Tasso has been confirmed as an intended runner for German trainer Marcel Weiss, while Pyledriver is set to represent William Muir and Chris Grassick after finding the now sidelined Hukum too strong when defending his crown in the Coronation Cup at Epsom.

The small but select list of King George VI and Queen Elizabeth Stakes runners is completed by Broome, who is Aidan O’Brien’s sole representative and was last seen winning the Hardwicke Stakes over the course and distance at the Royal meeting.

Coral’s David Stevens said: “There may only be a maximum of six lining up for this year’s King George, but with Westover and Emily Upjohn representing the Classic generation against four top-level winning elders, it promises to be a mouthwatering renewal.

“Following his impressive victory at the Curragh last month, we make Westover the one to beat at Ascot, although Emily Upjohn’s presence on Saturday adds plenty of spice to the race and we rate her as the favourite’s biggest danger.”