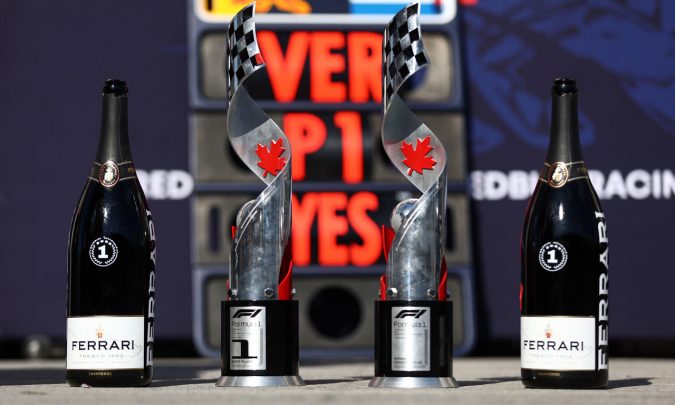 Here we consider the factors which might stand in the way of Verstappen charging to his second title in succession and look at the latest F1 betting odds.

Is Verstappen the best driver in the world right now?

With six victories from nine, and a commanding advantage in the championship fight, Verstappen is the grid’s in-form driver.

Fresh from dominating on the streets of Baku a week ago, the Dutchman produced an equally impressive display at Montreal’s Circuit Gilles Villeneuve.

Verstappen put his Red Bull on pole in the wet, and after beating Fernando Alonso to the opening bend, his victory – despite a late challenge from Ferrari’s Carlos Sainz – never appeared in danger.

He is 46 points clear of team-mate Sergio Perez as we approach the midway stage of the season and is now the 1/6 favourite in the F1 title betting. Red Bull meanwhile, have won the last six races.

What has happened to Leclerc?

Leclerc won two of the opening three rounds to lead Verstappen by 46 points but the Monegasque has endured a torrid run since – and largely through no fault of his own.

Leclerc’s retirements in Spain (May 22) and Azerbaijan (June 12) with engine failures were sandwiched by a strategy faux pas from his Ferrari team in Monaco (May 29) which denied him a probable win.

Sunday’s Canadian GP was a case of damage limitation after he started at the back following engine penalties. He drove well to finish fifth, but now trails Verstappen by 49 points – the equivalent of two wins – and he has drifted to 6/1 in the outright F1 betting odds.

Can Leclerc haul himself back into the title fight?

Despite Leclerc’s grid penalty, Ferrari will take some confidence from their speed in Montreal.

Sainz hustled Verstappen to the chequered flag following a late safety car, while Leclerc’s charge through the pack shows Ferrari still have a competitive machine.

The fast-flowing Silverstone circuit for next weekend’s British Grand Prix should play to their strengths and Ferrari are 4/1 to win the constructors’ championship, but there is no point having a fast car if it is handicapped by reliability.

Could mechanical problems pose a threat to Red Bull, too?

Perez stopped with a gearbox failure in Montreal to provide hope to Verstappen’s rivals that Red Bull’s technical gremlins could rear their head again.

But it should also be noted that Verstappen is on a run of six consecutive finishes, winning five of them, and finishing third in the other.

Lewis Hamilton’s campaign has been derailed by Mercedes’ porpoising woes, and the seven-time world champion looked set for another gloomy weekend in Canada when he finished only 13th in practice.

But Hamilton qualified fourth in the rain before improving one spot in the race to claim his first podium since the opening round in Bahrain.

The British driver said his result afforded him belief that the Silver Arrows could claw the gap back to Red Bull and Ferrari, and he is 40/1 in the title race ahead of his home race.

Up next? Silverstone 🇬🇧 pic.twitter.com/mE9mx4Ex7k

Haven’t we been here before?

Yes. Hamilton drove from last to fifth at May’s Spanish GP and predicted he could return to the winner’s circle this season only to be brought back down to earth with a bump by finishing eighth in Monaco and then struggling with severe back pain caused by his unruly Mercedes machine in Azerbaijan.

And even though Hamilton was rightly pleased to be back on the rostrum in Canada, he still crossed the line seven seconds adrift of Verstappen during a race which re-started with just 16 laps to run following a safety car period. He is 98 points behind Verstappen in the championship.

Formula One’s regulator, the FIA, has vowed to reduce or eliminate porpoising to protect driver safety, and issued a new technical directive on the eve of the Canadian GP.

Hamilton’s Mercedes team want a change to the regulations, but Red Bull and Ferrari are fiercely opposed. F1’s bouncing phenomenon is unlikely to go away and the row will rumble on for the remainder of the year.

With 13 rounds still remaining in the 2022 season, the FIA’s next move could have a bearing on the destination of this year’s championship.