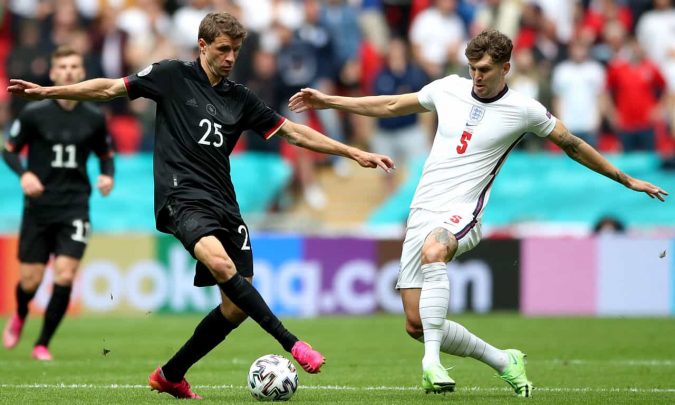 England will hope to avoid a second Nations League defeat in four days when they face Germany in Munich.

A 1-0 defeat against Hungary in Budapest was a disappointing start for the Three Lions while Germany came from behind to earn a 1-1 draw in Italy.

Tuesday’s match kicks off at 7.45pm and is live on Channel 4 as we study the odds to pick out some Germany v England betting tips.

The Nations League is a competitive tournament but England boss Gareth Southgate is understandably more concerned about preparing for the World Cup later this year.

Southgate suggested he may have incorrectly balanced picking a team to win with experimenting ahead of the World Cup after the defeat in Hungary, where West Ham winger Jarrod Bowen and Leicester full-back James Justin made their senior debuts.

“Across these four games, we are trying to balance having a look at things, finding out about players and trying to win,” said Southgate.

“Maybe I didn’t quite get the balance of that right today but we’ve learned a lot from it and I have to accept you are not going to win matches and you’ve got to ride the criticism that comes from it with the learning that should help us further down the line.

“We are disappointed because if we’re going to be a team that gets to the final stages of a World Cup, these are the types of games that we have to win.

“We have a pretty good idea of what our strongest team probably is. Quite a few of those players are coming not from an ideal preparation.”

Southgate is expected to name a stronger team in Munich but England go there as 23/10 underdogs or 4/6 to avoid defeat, with the draw also priced at 23/10.

Germany must cut out mistakes

Germany were knocked out of the European Championship after losing 2-0 to England at Wembley 12 months ago but are 6/5 to get some revenge with victory here.

They are building some up some decent momentum ahead of the World Cup, having won their last seven qualifiers and then beating Israel before drawing 1-1 away to both the Netherlands and Italy.

Last time out against Germany…

They dominated possession against Italy but went behind in the 70th minute before quickly equalising through Joshua Kimmich.

Italy made plenty of changes to the team that lost to Argentina a few days earlier at Wembley though and Germany were left disappointed with their failure to leave Bologna with all three points.

Kimmich said: “Italy is in transition, that’s why we really wanted to win. We didn’t manage to bring our game onto the pitch and didn’t have the intensity that people are used to from us.

“Against England, we have to be calmer and not make quite so many mistakes.”

This looks a tough game to call and there are a few decent options for punters happy to sit on the fence with Germany v England betting tips.

It should be noted though that the first half has been goalless in the last three Germany v England meetings and that run is 29/20 to continue.

Abraham may get chance to shine

Southgate has some useful attacking options if he chooses to rotate his squad as expected.

Harry Kane played the full 90 minutes against Hungary so Tammy Abraham could replace him up front.

The former Chelsea striker has had an impressive season with Roma and is 21/10 to find the net in Munich or 5/1 to open the scoring.

Bukayo Saka was introduced at half-time in Budapest and Jack Grealish was sent on just after the hour so both could start, while Raheem Sterling has had a few days to recover from illness.

Germany’s team could feature several Premier League stars including Ilkay Gundogan and Timo Werner, but the biggest threat may be Kai Havertz.

The Chelsea man came on as a second-half substitute against Italy and looks a good option to score first at 6/1 for Germany v England betting tips.