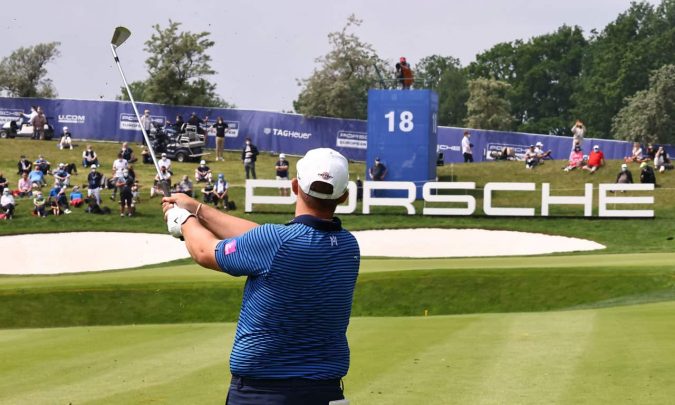 It is the fifth time the event has been staged at the venue where Tommy Fleetwood tees it up as favourite, his fellow Englishman Marcus Armitage defends the title and two-time major winner Martin Kaymer will have plenty of home support.

The action takes place from June 2-5 and we have picked out five players to watch in our European Open betting tips.

Meronk is certainly making a splash these days and has played his way to second favourite in the European Open betting.

The big Pole made headlines at the Dutch Open on Sunday when he took off his shoes and socks to play his second shot from the water at the par-3 eighth and drained his 40-foot par putt on the way to third place, just a shot behind Victor Perez and Ryan Fox.

It also sealed a spot at The Open and was Meronk’s sixth top-six finish of 2022 and a first win must be close. The timing this week could be perfect – he turned 29 on Tuesday and was born just up the road in Hamburg.

MacIntyre made it nine out of nine major cuts made at the US PGA a couple of weeks ago but if he wants a crack at a perfect 10 at Brookline then a big week is needed in Germany.

The Scottish left-hander is outside the world’s top 60 and must play his way back in to make sure of a place at the US Open.

It will help that he has fond memories of Green Eagle, having finished in a share of second place, just a shot behind Paul Casey, in 2019.

MacIntyre’s weekend rounds at Southern Hills are best forgotten but he should be going into this one rested and raring to go.

Smith is eighth in driving accuracy – a key requirement at Green Eagle – and last ranked so high back in 2017, when he beat Alexander Levy in a play-off the first time the event was staged here.

He was way off the pace the following two years, T64 then a missed cut, but shared 11th place in 2021 when top-class golf returned to Hamburg after a year away due to the pandemic.

Smith has posted a couple of top-20s this year, in South Africa and at the Catalunya Championship, and a tie for 21st at the British Masters.

Last week he could have been looking at better than a share of 24th place at the Dutch Open but a Saturday 76 blotted the copybook.

Molinari is another player with something to celebrate away from the course this week after confirmation the Italian will be one of Henrik Stenson’s vice-captains for next year’s Ryder Cup in his home country. That by itself is no reason to back him here but he shared second place last year when the event was shortened to 54 holes and has posted a couple of top-10 finishes over the past few weeks – at the Catalunya Championship at the start of May and at the Soudal Open in Belgium a fortnight later.

He has been away from the winners’ enclosure since 2017 but is worth considering for European Open betting tips with each-way returns on eight places.

Martin Kaymer is the big-name home hope but his fellow German Schneider has found a bit of form at the right time.

Six missed cuts kicked off his 2022 but a share of 13th at the Catalunya Championship stopped the rot, only for his stay at the British Masters next time out to be a short one.

But Schneider took a share of seventh at the Soudal Open and fourth place on his own at the Dutch Open last Sunday after recovering from an opening bogey to close with a 68.

He was comfortably inside the top 10 in the 2021 edition of this event so is a value pick to complete our European Open betting tips.