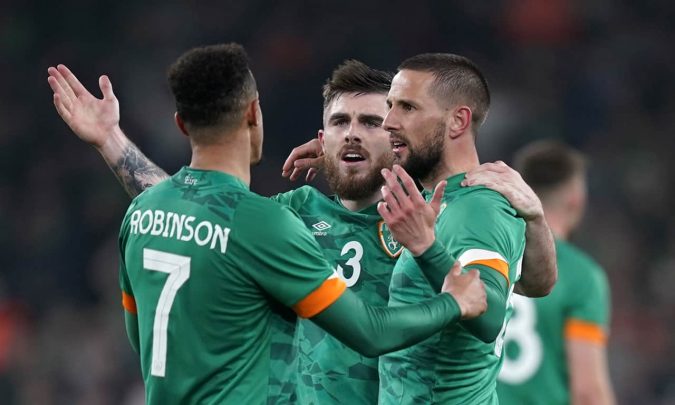 The form book only points to one result as we pick out some Armenia v Republic of Ireland betting tips.

The Nations League campaign gets going and the hosts could do with getting back on track after a miserable spell – something their opponents have recently managed themselves.

The Republican Stadium in Yerevan hosts this one on Saturday June 4, with the action kicking off at 2pm live on Premier Sports.

It has been a rollercoaster ride for Ireland manager Stephen Kenny. Since losing in Portugal last September – having led until the 89th minute only for Cristiano Ronaldo to somehow find two goals to add to his swollen international account – Ireland have won four and drawn four.

No major scalps have been taken but you can only beat what is in front of you and Ireland did the business against Azerbaijan and Luxembourg in World Cup qualifiers and Qatar and Lithuania in friendlies.

More impressive was holding the Portuguese to a goalless draw when Ronaldo and Co travelled to Dublin for their return fixture, then just a couple of months ago Kenny’s men shared four goals with Belgium in a friendly.

It is a far cry from the dark days of a two-year run from September 2019, near the end of Mick McCarthy’s second spell in charge, when Ireland went 16 competitive games without a victory.

The lowest point was a home defeat by Luxembourg in a World Cup qualifier and they also missed out on Euro 2020 after losing a penalty shoot-out to Slovakia.

Kenny was in charge for much of that sequence but kept his job and eventually turned the corner, so his story might offer some encouragement to the man in the opposite dugout, Armenia boss Joaquin Caparros.

He lost his first game, to North Macedonia in September 2020, before winning six and drawing three of his next nine to clinch Nations League promotion, make a fast start to World Cup qualifying and hold Croatia to 1-1 draw in a friendly.

Then the wheels came off. Armenia lost their next game, a friendly against Sweden, and 2021-22 has not been pretty with three draws and eight defeats including two to Germany with an aggregate score of 10-1, a 9-0 (not-so) friendly mauling at the hands of Norway and a 5-0 humbling on their own patch against North Macedonia.

Group B1 could throw up a few surprises but it should end up in a straight fight between the Irish and Scotland for top spot. Ukraine are also in there.

After Armenia, Ireland face Ukraine twice (the away match is in Poland due to the Russian invasion) with a visit from Scotland in between, and Kenny’s men have a chance to lay down an early marker.

They are 12/5 to be winning at half-time and full-time while 3-0 to Ireland on the correct score is 16/1 and worth considering for Armenia v Republic of Ireland betting tips.

Matt Doherty, Andrew Omobamidele and Adam Idah are injured while Josh Cullen is suspended but Kenny has welcomed Michael Obafemi back to the squad and called up CJ Hamilton and Festy Ebosele for the first time.

Former Southampton youngster Obafemi, who made his international bow four years ago but still just has the one cap to his name, scored 11 goals for Swansea between February and the end of April.

Kenny said: “It’s the first time in his career, Michael, that he’s had a run of consecutive games.

“It’s very hard for young players in the Premier League to get that, just the standard is so high and the squads are so big, so the move to Swansea, which is a great club and a great platform to really do well in the Championship, you can see really the improvement in his play.

“I’ve seen aspects of his play that I haven’t seen previously with Swansea – his hold-up play has really come on well and he’s shown great football intelligence allied to the natural speed that he’s got.

“The performances I’ve seen recently with Swansea are better than I’ve ever seen from him, so his rate of improvement has been very high.”