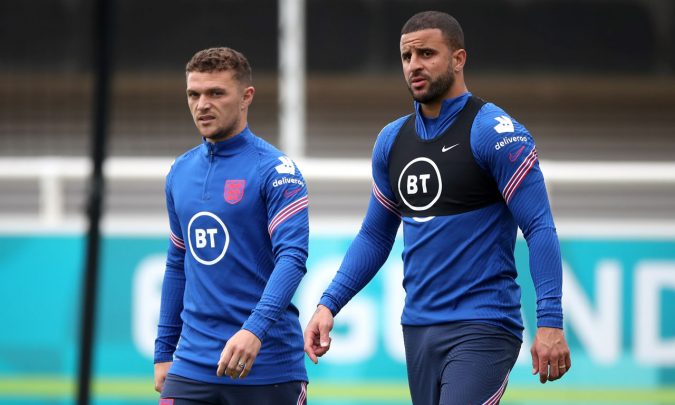 Strengths and weaknesses of the England right-backs

The countdown is on to the World Cup 2022 and England players will be desperate to impress when the new season begins in a bid to secure a place in Gareth Southgate’s squad.

One position in which the England manager has the most options available to him is at right-back, where Southgate is almost spoilt for choice.

Who should get the nod for the opening match against Iran? We have crunched the numbers to try and decide which of the leading contenders has the most to offer the national team.

Walker is undoubtedly the experienced option of the possible England right-backs and had won exactly the same number of caps as the rest of the other contenders put together at the end of this summer’s Nations League fixtures.

He made his debut in 2011 and his versatility has made him a key player for the Three Lions under Southgate.

The Manchester City man played as a right-sided centre-back in a back three at the 2018 World Cup before being used as a more orthodox right-back in a back four at the European Championship last summer. Attacking wise he arguably offers the least to the team but his pace has often proved vital in terms of ensuring England are not caught out by counter-attacks.

Of the five contenders, he enjoyed the best tackle success rate in the Premier League last season at 69.6% but made the least tackles and interceptions per 90 minutes, possibly due to City’s dominance of possession.

Alexander-Arnold will be hoping to make some amends for missing out on the Euros last summer, having suffered an injury in a warm-up game against Austria which ruled him out of the tournament.

His stats for Liverpool would make him a nailed-on starter in the eyes of many fans but Southgate is seemingly not convinced and has dropped the 23-year-old from his squad at times while he also used Alexander-Arnold in a midfield role against Andorra during qualifying.

Southgate has been criticised for being overly defensive and his reluctance to make Alexander-Arnold a regular backs up that cautious approach.

He produced more assists in the Premier League last season (12) than the other possible England right-backs combined and is by far the best option in almost every attacking category, most notably with four crosses per 90 minutes. Reece James ranks second in this category with 0.4 crosses per game.

Defensively he does not compare as well, though, and that is presumably Southgate’s biggest concern. His tackle success rate of 54.5% was the lowest of the contenders we have analysed while he only ranks fourth for duel success and pressures per 90 minutes.

Alexander-Arnold may be the best option for group games which England will hope to dominate but his defensive deficiencies could be the reason he misses out in the knockout stages as the games gets tougher.

It is easy to forget that James only made his England debut in October 2020, such has been his rise to prominence at Chelsea and then with the national team.

He is no stranger to the big occasions, though, having played the full 90 minutes as Chelsea won the 2021 Champions League final.

James only made one appearance at last summer’s Euros and just three starts in World Cup qualifying so he looks to have work to do to become the first choice from the England right-backs.

Similar to Alexander-Arnold, his best qualities are attacking ones having produced nine assists for his club last season while he ranked second behind the Liverpool man for both shot-creating actions and crosses.

His biggest weakness seems to be when opposition players are running at him. Only eight of his attempted tackles on players dribbling with the ball were successful, which puts him bottom of that category.

The odds suggest Trippier’s place on the plane to Qatar hangs in the balance which may seem unfair given his previous importance to England.

He was a revelation at the last World Cup in 2018 when he was named in the team of the tournament, helped by his free-kick which gave England the lead in the semi-final against Croatia. Trippier remained a regular for England during his time playing for Atletico Madrid in Spain. He is now back in the Premier League at Newcastle and having helped them avoid relegation last season, he will hope a summer spending spree allows the team to kick on when the new campaign begins.

Southgate has often spoken in glowing terms about Trippier and his versatility makes him a useful member of the squad.

Defensively he is a reliable option and enjoyed the highest duel success rate last season (measured across his time in Spain and England) while he also ranked second of the five in terms of tackles and interceptions per 90 minutes.

He failed to produce an assist and was joint-bottom for crosses so Trippier is certainly a defensive option but his threat from set-pieces should not be forgotten.

The Leicester man is the newest of the England right-backs but still has a lot to do to force his way into the World Cup squad and could be relying on injuries to make the cut.

His versatility means he can play on either wing and he was on the left for his debut in Hungary earlier this month but suffered a calf injury which meant he was withdrawn at half-time and failed to feature in the other three Nations League games.

Justin had been close to a call-up at the start of last year, with Southgate saying he had “been as good as any full-back in the country” before injury struck.

The 24-year-old suffered an anterior cruciate ligament last February, leading to a 49-week lay-off that meant he missed the Foxes’ unforgettable FA Cup win and a shot at Southgate’s Euros selection.

He will need to avoid further injury setbacks to have any hope of going to Qatar but ranks well in most defensive measures, perhaps helped by playing for Leicester rather than one of the top four.

Justin led the way in pressures per 90 minutes last season as well as tackles and interceptions while his tackle success rate of 67.7% was second to Walker.

A versatile player who is stronger defensively than going forwards, it is easy to see why Justin is a contender to make Southgate’s squad as one of the England right-backs.