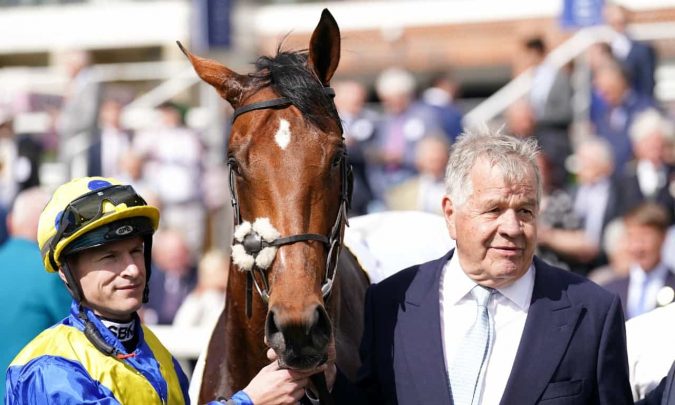 The Cazoo Derby is the race all trainers and jockeys want to win and one of the most prestigious races on the horse racing calendar.

The race takes place in early June each year at Epsom Downs and the one-mile four-furlong course is seen as the ultimate test of the thoroughbred as the Derby winner will have to successfully travel up and down country, deal with lightning-fast left-hand turns and also gallop the lung-busting home straight to prevail as champion.

There are 18 horses still in the hunt for Derby glory with the big race now only days away and now appears the ideal time to look through the contenders and pick out some Epsom Derby betting tips.

The Greatest Flat Race in the World is back for its 243rd edition on June 4th.

Here’s what you need to know ahead of the big day – but who’s #YourHorse for the Derby?​ 🏇 pic.twitter.com/hb9U3UZ9xX

The favourite is the obvious place to start in our Epsom Derby betting tips and this twice-raced colt is well worth his place at the head of the market following an impressive display in one of the key trials, The Dante, earlier this month.

The Nathaniel colt now bids to land the premier Classic and the way he was powerfully hitting the line at York suggests the move up to a mile and a half will pose few problems.

Trainer Sir Michael Stoute has won the Derby five times, most famously with Shergar in 1981, but is looking for his first success in the race in 12 years, something which would catapult the 76-year-old back to the forefront of the training ranks at the latter stages of his career.

There was despair in Ballydoyle when ante-post Derby favourite Luxembourg was ruled out of the race only days after finishing an encouraging third in the 2000 Guineas.

But it wasn’t long before the next cab off the rank was sauntering his way towards the top of the Epsom Derby betting.

Second in the Group One Criterium de Saint-Cloud in his final start at two, Stone Age is unbeaten in two starts this season and marked himself as Aidan O’Brien’s number one when taking Leopardstown’s Derby trial by a cosy five-and-a-half lengths.

As always, O’Brien holds a strong hand in the race and others from his stable include Chester winners Changingoftheguard (9/1) and Star Of India (16/1).

But Stone Age is the one that gives the master of Ballydoyle his best chance of landing a ninth Derby.

Hot on his father’s heels, Donnacha O’Brien saddles his first real Derby contender and the Ulysses colt has a fine chance of obliging in our Epsom Derby betting tips.

Only seen twice at two, he returned with an impressive display to take the Ballysax Stakes at Leopardstown in April and shaped like the extra two furlongs of the Derby will be tailor-made for this progressive and gritty three-year-old.

The form of that win was given a significant boost by the runner-up Buckaroo when he won a competitive Listed event at the Curragh and Piz Badile is set to have the assistance of Frankie Dettori in the saddle.

Charlie Appleby has won this race twice in the last four years and this son of  Teofilo looks the Moulton Paddocks handler’s best chance of notching up a hat-trick of Derby victories.

A winner of the Jumeirah Derby in the spring, the colt took his winning run to four when storming to Listed glory at Newmarket last time.

That seven-length success over Derby outsider Hoo Ya Mal (150/1) was enough to convince connections to stump up the hefty supplementary fee at the six-day stage and there could be further improvement to come as he steps up in trip.

Godolphin and Appleby will also be represented by Walk Of Stars (14/1) and Nahanni (16/1).

🗣 “Those two horses have untapped potential.”

Charlie Appleby on his potential Derby contenders which include New London, Walk Of Stars & Nahaani

A return to good ground saw Ralph Beckett’s charge return to the Derby picture when he scored at Sandown on his seasonal bow and the Juddmonte team appear content to keep their powder dry and head straight to Epsom with this son of Frankel.

The smoke signals coming out of Beckett’s Kimpton Down base are encouraging and he could be an interesting candidate in our Epsom Derby betting tips.

Roger Varian has a fantastic chance of getting on the Epsom scoresheet with this strapping son of Olden Times, who has progressed at a rate of knots in the early part of the season.

A maiden heading into the 1m1f Feilden Stakes at Newmarket in April, the colt defied odds of 22/1 to break his duck in style and that set him up for a tilt at the 2000 Guineas where again he outran his odds to finish fourth at 33/1.

Sure to better over further than a mile, he looks tailor made for middle-distance Group One contests. The only dilemma connections now have to decide is whether to point their ever-improving charge in the direction of Epsom or head to Chantilly for the French equivalent a day later. Last but not least in our Epsom Derby betting tips is Sonny Liston, who will be looking to land the knockout blow in the premier Classic that will return him to the winner’s enclosure for the first time since making an impressive debut at Sandown last summer.

Although held behind Eydon at Newmarket on his reappearance, he caught the eye when a respectable third behind Star Of India at Chester last time.

That run suggests there is definitely an engine inside Sonny Liston’s chassis and he may be slowly coming to the boil at just the right time for handler Charlie Hills.